The art of the solo. How does Barbara say to her audience? "Enjoy, relax, dream, tap your feet, get goose bumps and have fun without mentality, but with challenging music!" This is exactly what happens at every solo concert, when the auditorium does not want to calm down because of the brilliant techniques and clock breaks on the Hammond B3 and asks for further encores. Alone on stage, Barbara uses her venerable keyboard instrument with all its drawbars and midi implants most consistently, and with the stupid independence of her four limbs goes to all the limits of playability, because solo there is no hiding. Barbara's solo concerts: a strong personal, downright intimate performance. For Barbara there are no rigid boundaries, there are always flowing transitions. She manages to combine influences from swing and bebop, blues, soul, latin and funk with traditional as well as modern jazz. "Jazz," admits Barbara, "is for me a synonym for freedom. Freedom from prejudice and discrimination, freedom from coercion and convention." She wants to convey this to her audience and thus creates an incomparable and captivating experience, especially on stage.

A concert classic: The Barbara Dennerlein Duo. The organist has performed hundreds of concerts and tours almost around the world in the intimate line-up consisting of Hammond organ and drums. Numerous television appearances and countless fans testify to this musical symbiosis, which is immortalized in the CDs "Love Letters" and "10th Anniversary - It's Magic". The duo's music is based on great musical freedom, which is nourished by the mutual inspiration of the duo partners and occasionally sounds like a large orchestra. Barbara knows how to develop melodic lines, chords, sounds and refined bass figures that correspond to the flexibility of a double bass player with two manuals, the synthesizer and the play on the foot pedals, which she individually developed to perfection. Her musical partner on the drums follows the organist's drive, accompanies her straight or plays around her with complex rhythms, lays sound carpets or creates spatial-percussive moods.

Bebop and Barbara make "Bebab": our own record company on the one hand, and years of concert tradition with world-class musicians on the other. Trio, quartet, quintet in changing line-ups stand for highly musical, concentrated ensemble playing as well as for extravagant hikes through experimental, expressionistic, free or spacious sound spaces. Barbara whirls over keyboards and foot pedals as if inspired and lets the fullness of sound of her Hammond B3 enter into a rapid liaison with the congenial play of her band members in all facets. New heights are constantly being reached, and if you think, "Phew, it can't get any better, hotter, more skillful and more spirited" - you get another boost. Or a soulful blues immerses musicians and listeners in a relaxed, feel-good bath.

The organ pipes swing when Barbara whirls over the manuals and pedal keys of the pipe organ. On numerous concert tours in churches and concert halls around the world, the artist masters a wide variety of instruments in front of a sold-out house. The "Grand Lady of Organ" has dared to take an epoch-making step: She transfers the structures and the feeling of the multifaceted jazz to the veritable pipe organ and thus established a new "classic". Thanks to her masterly mastery of pedal play, Barbara succeeds in fully exploiting the immense sound possibilities and making the somewhat sluggish instrument vibrate with works composed by her especially for the pipe organ. The grandiose master of registers, manuals and pedals plays on the large systems with so much groove that absolutely no one could miss a single ounce of jazz feeling. An extremely impressive innovation has emerged from an "almost sacrilege". Barbara combines the elements of jazz - blue notes, syncopation, sleek, earthy walking bass, rousing improvisations - and contemporary music into a completely new jazz image with a great feeling for timbres and their combinations with gripping virtuosity. Cheeky, brave, without blinkers, she succeeds in what comparatively only works in the best orchestral arrangements: music from a holistic point of view - rousing, gripping, marvelous. An exciting pleasure ...

When the smallest big band in the world - namely the Hammond Organ - meets the big bands of the world, a brilliant musical fireworks display. Not only because the timbres of the big band and the Hammond organ come together, but also because it is a great pleasure for all musicians to interpret the pieces together and perform them in concert. Being responsible for the sound of an entire big band - a great challenge that Barbara always gladly accepts. National and international. And always with crystal-clear arrangements, well-conceived musical ideas - and stunning success with the audience.

HAMMOND MEETS ORCHESTRA is the programmatic motto, performed on June 1, 2005 in the Essen Philharmonic, with Barbara in the personal union of organist, composer, musical idea generator and independent producer. The extraordinary music project is a novelty, as the merging of the organ-jazz trio with the philharmonic orchestra has so far been untested, in other words, it involves opening up a fundamentally new musical aesthetic dimension. Music from a holistic point of view - thrilling, gripping, marvelous. The freedom in a jazz formation with all the improvisations meets the unbelievable richness of sound of an orchestra with thoroughly composed and notated parts. An exciting pleasure in which Barbara bridges the gap to the symphonic and takes the listener on an adventurous and exciting journey through constantly changing musical landscapes.

When the father with the daughter ... Magic colors with sounds - in the music and on the screen: The music and the images have the power to create the most varied of moods and arouse inner feelings. Barbara owes her talent for adding shimmering colors to her compositions in large part thanks to the creativity of her father Hans , who knows how to express an attitude towards life and capture moods in his artistic use of colors. What is the controlled coincidence of filigree color gradients for the father in his pictures, turns into a musically multi-layered language with daughter Barbara, which is full of variety and diversity, and which reflects the feelings of the artist and the influencing and inspiring impressions of her surroundings. Impressions which, not least of all, the pictures and other artistic works of her father exert on her. This created an interplay between the two: mutual inspirations that culminate in joint events of the vernissage and concert, in outstanding and at the same time very personal moments. 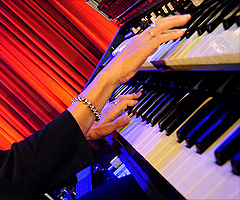 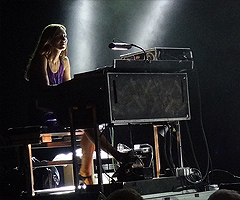 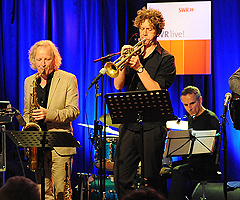 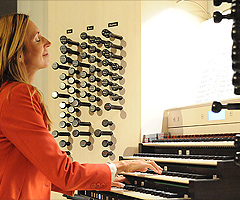 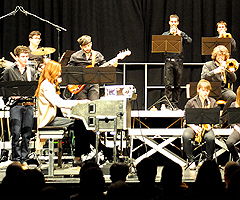 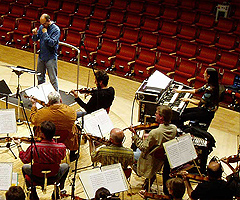 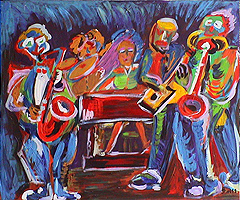